Where do we need bike lanes and paths?

One reason for hating a lot of bike infrastructure in Sydney is that it appears to have been built with no thought at all. Someone gets a grant or some more money in the budget. Planners who have no experience outside of planning roads for cars pore over maps and draw lines from A to B. Workmen who are used to laying roads and drains then get to work digging trenches and laying concrete and pouring tar.

The result is generally an unholy mess. Although a bike path or bike lane is a strip of tar or concrete - much the same as a road - it has different engineering characteristics to a road. Runways and taxiways for aircraft are also strips of tar of concrete, but you don't get a road designer to lay them out (not unless you want planes ending up in the drink or bogged in the mud).

So let's start at the beginning. When you get in a car (or a plane, or a train, or a boat), you are setting out to make a journey. You are going from A to B. When planners sit down to work out where to put airports and ports and train stations and freeways, the first thing they look at is traffic patterns to see where it is people are coming from and where they want to go. They look for the trip generators and then think about the best way to build a railway or road from A to B, and then C, D, E and so on.

Yes, people use bikes for exercise, so some journeys are not about going from A to B - they're about doing a lap and ending up back at A. Ignore them - instead, think about the other reasons why we might go from A to B.

For starters, there's work. Then there's school runs for the kiddies, or getting to uni for the older kids. Don't forget about shopping. And there's also entertainment and sport (either playing it or watching it). Visiting family and friends. I'm sure you can think of lots more reasons why you hop in your car and drive somewhere.

The road network has been laid out to accommodate every variety of journey, whether it's delivering flowers to your door or getting your toenails trimmed at a podiatrist.

Now, we can use bikes on that road network. I can hop on my bike ride to uni, or I can ride out to Homebush to see the footy. 90% or more of the road network works very well for bikes - I am quite comfortable toodling around the backstreets of most suburbs on my bike. The streets are quiet and being on a bike doesn't mean you'll finish the journey in an ambulance. I don't see any point in building bike infrastructure where it's not needed.

However, not all roads are bike friendly. They can be death traps. Their main characteristic is lots of car traffic moving quickly along narrow lanes. Slow moving bikes and fast moving cars do not mix well at all. I avoid those roads like the plague - and so do most cyclists (which is probably why a lot of motorists think cyclists are few and far between - we've simply chosen to take a different route that is more suitable to a bike). If we strike a road like that, we look for an alternative path through the back streets. In other words, we rat run (although at a much slower pace than the boy racers in their Nissan Sylvia's with the badges removed and an exhaust the size of a 2 litre coke bottle).

Where that comes unstuck is where the rat runs don't exist. Unfortunately, there is no getting around Mother Nature - ie, geography. Geography throws up all sorts of pinch points - valleys, ridges, water courses and so on. There's a classic example on the lower north shore at Northbridge, where a beautiful old suspension bridge crosses a valley. 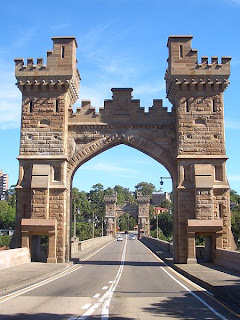 The road on either side leading down to the bridge is steep and narrow. I've cycled up and down it twice - I'll never do that again. The grade doesn't bother me, but the cars tearing past close by do. Look at the lanes on the bridge too - this was designed for the traffic of the 1890s. They're very narrow, allowing no passing room. If you're on a bike and a car impatiently decides to pass you, it's very squeezy. This bridge is normally teeming with cars, so it's a very unpleasant and unsafe place to be on a bike. Going up the hills on either side are just as bad. Thing is, there's no alternative. It's the only route across this geographic feature in this particular area.

This is a prime example of where an alternative bike route is required. These sorts of things are dotted all over Sydney. Some are hundreds of yards long; others are a few yards long (pinch points designed to calm traffic are a classic example). These are the sorts of things that terrify newbie cyclists, and prevent them from riding more often or to places that they need or want to go to.

What drives me insane is that millions are being spent on building high profile bike lanes where they are much lower down the priority order, but much higher up the visibility order (ie, as in garnering favourable media attention in the SMH). Bike infrastructure should be aimed at eliminating cycling black spots, and the only way to find those black spots is to ride a route a number of times at different times of the day. Designing them by poring over a map on the computer only creates a highway to hell. Or a bike path to hell.
Badly proofread by Boy on a bike at Thursday, April 21, 2011