Is it Thursday already? Must be - I fell asleep on the couch not long ago. By the end of a week of getting to and from work under my own steam, I'm knackered.
Four amigos waiting at a light. We have a nice mix of cycling styles here, and the nice thing to see was a few of them chatting to each other. Cyclists are a much more social bunch than any other group of people moving from A to B. If a cyclist pulls up beside you and starts talking, that's nice. If you're on the bus or train and the person beside you decides to start talking, there's a 98% chance they're insane. 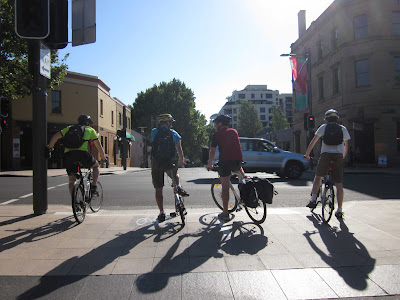 Here are two of them, having a very pleasant chat as they wander along under the trees. I think the bloke on the right rides in from just over the bridge - he parks his car in a free parking zone, unfolds the bike out of the boot and off he goes. The bike looks fine for a short trip of only a few kilometres, but I wouldn't want to do much more than that. He fairly motored along though. 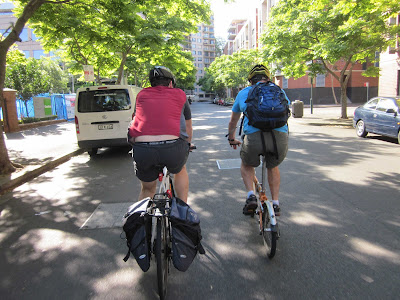 Ever wondered what sort of people stick those "free the refugee" posters up on poles? Well, here we have a pair. She was short and fat; he was pimply. 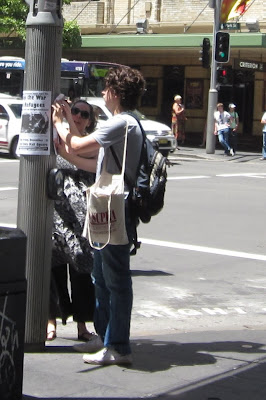 Why do they think that we are at "war" with refugees, and how will bringing the troops home help? If we were at war with refugees, we'd be machine gunning their boats and burning them to the waterline. Our detention centres would not be packed with people the Navy plucked from the water - they'd be empty, because everyone who tried to enter would be dead. Enough of the hyperbole - we are not at "war" with refugees. It takes a uni student to be stupid enough to believe that sort of tripe.
Badly proofread by Boy on a bike at Thursday, November 25, 2010