Dept of Climate Change - does anyone ever take any leave?

Before we get stuck into whether anyone in Canberra is taking any leave, lets have a look at how personally rewarding the climate change gravy train can be: 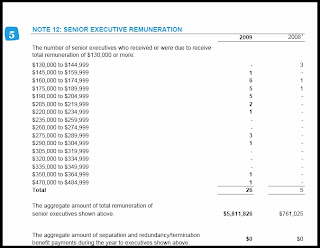 That's 14 public servants being paid over $200,000 - including one earning around $350,000 and the big kahuna raking in over $470,000. That would be Martin Parkinson, the Departmental Secretary. I'm sure the battlers being whacked with higher power bills will forgive them.
Now, on to the leave provisions and salaries of those hard working pubes.
Last year, wages and salaries came to $25.473 million. Leave and other entitlements added a further $6.6 million. That doesn't include Super, which was yet another $4.2 million. I don't understand how you can have wages of $25 million and leave entitlements of $6.6 million - that implies around 21% of their time is leave.
Four weeks off per year equates to a bit over 8% of the working year taken as leave. A 19 day month with 4 weeks leave comes to 11.5% as leave. A 9 day fortnight with 4 weeks leave comes to 17% of the year off. How on earth do you get to 21%? They must work some funny hours in Canberra. 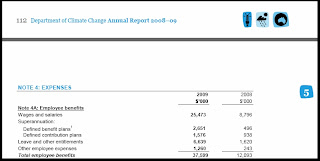 The other amazing thing is that provisions for leave add up to $11.56 million - this for a department that is only 2 years old! When your entire wages bill is only $25 million, how do you end up with provisions of $11.56 million, which equates to an average of 46% of a year off for every employee? 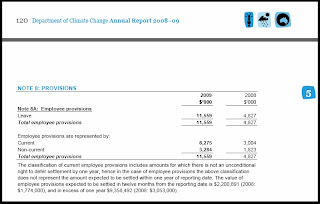 Madness. Only in Canberra.
Oh, and the Minister that oversaw this is now the Finance Minister. I wonder if PWong has ever read a financial statement?
PS - if you are interested, the Dept has a huge swag of nicely paid jobs going at present. I love the sound of the Travel Manager's job:

The Travel Team sits within the Business Services Branch. The Travel Manager is responsible for developing and maintaining the Departments travel policies and managing the Departments external travel provider under the whole of government travel arrangements. Through the supervision of a team travel offices, the Travel Manager provides support to business areas in supplying high level advice and reporting in relation to travel trends and compliance.

Executive Level 1
$87,362 - $111,299
Gee, I'd like to get $100,000 per year for sitting in an office with a poultice of underlings, essentially telling other public servants how to book plane tickets and hotels when they jet off on their all-expenses paid overseas junkets. I can't believe they need an entire TEAM for this.
Badly proofread by Boy on a bike at Monday, November 08, 2010