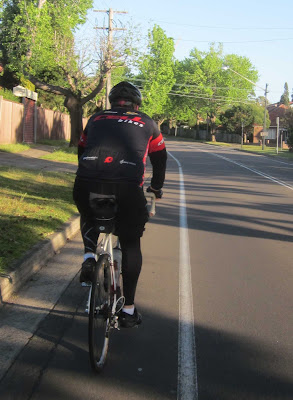 The first few minutes of any ride are always taken relatively slowly as the muscles are given time to warm up. On most rides, the warmup takes place in suburban back streets where one rarely sees another cyclist. However, I did a longer ride recently where I was out on the main road within 2 minutes, and that road sees a lot of cycle traffic.

About a minute later, this bloke overtook me. He's a bit like me - a definite MAMIL (middle aged man in lycra) who is a bit wide across the beam. I hate it when I get overtaken - the lizard part of the brain kicks in and immediately starts screaming, "KILL THE INTERLOPER". I had to let him go though - I'd done no more than three minutes cycling by that point, so I wasn't going to put the hammer down to catch up. Over the next few minutes, I watched him creep away of me until he was perhaps 250 metres ahead - and as my speed slowly increased as the legs fired up, his gains became smaller and smaller.

Then he stopped pulling away.

And then I started gaining on him.

I took this photo when I finally caught up to him. About a minute later, we parted ways, so I never got to overtake him. I'm sure I'll go to my grave regretting that I never got in front.
Badly proofread by Boy on a bike at Wednesday, October 17, 2012

I just had a thought.

How do you overtake without riding on one of 'our' lanes?