My eternal gratitude to Duncan, who did what I should have done - he looked up Yonel Watene and found that he started work in September as a.....bike courier! 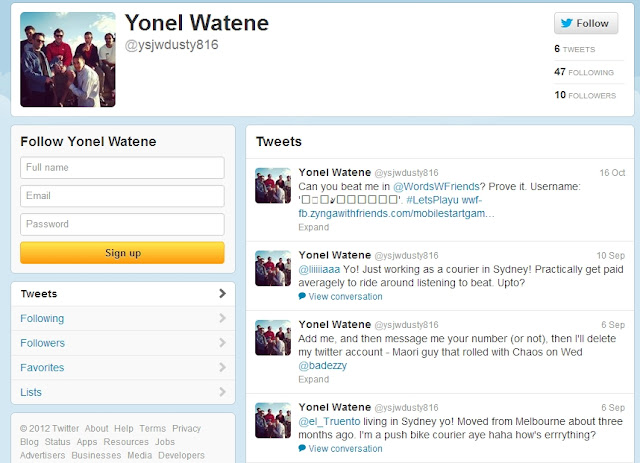 I'm glad that Yonel is working and making an honest living. And thanks Duncan, that is gold. From what I've seen and read, couriers deliberately ride the simplest, most indestructible bikes possible. Many go for single speed or fixed gear bikes because there are fewer parts to break - and when things on the bike break, you can't work. Which means no income.

However, it does put a slightly different perspective on his statement to the Daily Telegraph:


Cyclist Yonel Watene walked his bike to the pump from his home nearby to pump his flat tyres yesterday.
"I'm broke so I don't have a pump," he said.
"It could be the difference between someone getting to work on time or not.
"I guess they waste money on other things."


Unless Yonel had changed careers by the time he spoke to the Telegraph, he was still working as a bike courier - and what sort of worker goes to work without a proper set of tools? Does a plumber leave for work without a set of wrenches? Does a chippie go to work without a hammer, tape measure and circular saw? No. Not unless you're a right twat.


Cyclists tend to be a pretty social bunch in the main. If they see another cyclist in trouble - like on the side of the road with their bike upside down - they'll slow down or stop and ask if they need any  help. "Help" might involve letting the cyclist with a flat use their pump.

It happened to me once - I was halfway home from the Blue Mountains when I got a flat - about 15 miles from home. I changed the tube, and when I tried the pump, I found it had filled with water over time and the seals were rotten and useless. A few minutes later, a cyclist happened by, saw I was in trouble and he lent me his pump. Problem solved. No need for government intervention and the expenditure of tax dollars from non-cycling tax payers.

If you're on a busy cycle route, there are cyclists buzzing past all the time - help is never far away.

On a final note, I have noticed that bike couriers like to gather at a particular spot in the city at the end of the day and drink beer out of king browns (that's a 750ml bottle for you foreigners). You can buy a cheap pump for the cost of 6 bottles of VB. So the question for Yonel and his ilk is this - if you are part of the after work beer drinking bike crowd, are you willing to forgo six bottles of VB in order to be self sufficient on your bike, and not a burden on the rest of us? Are you wasting money on other things, like beer, instead of buying things that are essential to your job?
Badly proofread by Boy on a bike at Sunday, October 28, 2012