How to make a Greenie shut up

I'll have to admit that until today, I had no idea how to make a greenie shut up. However, it seems that a sure fire way to do it is to expose them to the wider world.


I'll admit that the only reason I have ever heard of this bloke is via Andrew Bolt. There's not much point in following that link, as Michael Quall has protected his tweets. I'm amazed it took him this long to figure out that if you want to get elected to any office in this country, it's not a good idea to run around calling people "cunts" on a regular basis. Especially in print.


I didn't get to screen dump his tweets before he protected them, but I can re-type them from my phone:


@cameroncollie you just stuck your flute in your pussy on your own time then?


community development at the end of my fist, anger is a gift.


andrew bolt is a vile cunt of a man. I openly condone hunting him down and beating him within an inch of his life. bit.ly/lmi3lk


@MartinGHodgson christopher hitchens was a deadset cunt. their self-righteous zealotry has no higher moral ground than pell et al.


And those are just some of his tweets from the last day before he protected his Twit-stream. This bloke has 8 kids - I hope he doesn't talk that way in front of them.


Did anyone from the Greens bother to background check this bloke before they endorsed him as a candidate? If they didn't, then I guess that makes them a pretty hopeless bunch of cunts. If they did, and they read through that pile of tripe and didn't ask him to tone it down.....it makes you wonder.


What really makes he laugh is that this bloke was asked to write a blog a while back for my least favourite charity, ActionAid. Just for laughs, here is a screenshot from the ActionAid site today - note the twitter feed over on the right "Saudi woman sentenced to flogging for swearing in text". The irony - it burns. 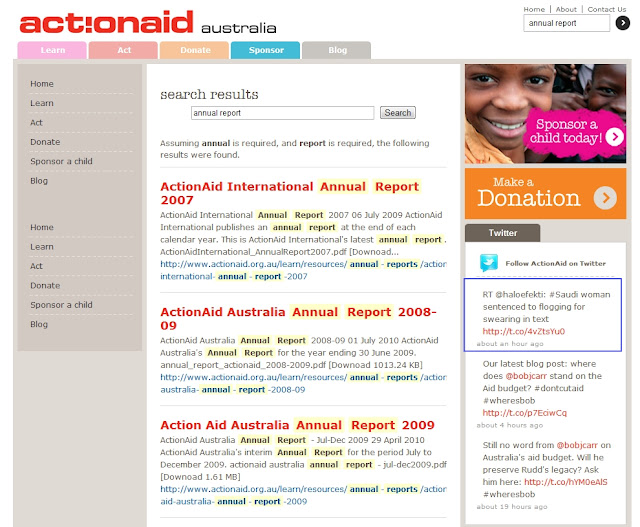 On a more serious note, let's be thankful that we still have enough freedom of speech in this country to be able to call other people cunts. If this cunt wants to call a cunt a cunt, I'll support him.


But just be careful not to call him "white" - that might land you in court.
Badly proofread by Boy on a bike at Wednesday, April 11, 2012

A sudden slew of random highly offensive tweets some targeted at media identities and some at a teen boy band followed by an account lockdown seems highly suspicious of a hacked account to me. It's impossible to know either way at this stage. I presume you believe in innocence until proven guilty?

I read his stuff going back several days - well before the whole Bolt thing blew up. It was all utter shite like what I posted. If he was hacked, he was hacked a loooong time ago. I also had a look at his blog - it was all in the same vein.

I don't care about his colour or his politics, or even his devaluing of the word "cunt" - but I'd never vote for a man who thinks that beard he wears is in any way fashionable or fit to be viewed in public.

"A former ALP member, he now passionately believes in the message of the Australian Greens, and strives in his own life, and to encourage others around him, to live the ideals of a compassionate, caring, and sustainable existence"

He certainly likes the word:

What's the problem ? Andrew Bolt IS a cunt !