Astroturfing is a form of advocacy in support of a political, organizational, or corporate agenda, designed to give the appearance of a "grassroots" movement. The goal of such campaigns is to disguise the efforts of a political and/or commercial entity as an independent public reaction to some political entity—a politician, political group, product, service or event. The term is a derivation of AstroTurf, a brand of synthetic carpeting designed to look like natural grass.

In the SMH today, we had David Shoebridge MP complaining about the number of firearms permits being issued in NSW. You can read David in  his own words here.

Intriguingly, the SMH quotes The National Coalition for Gun Control. What exactly is the NCGC?

Well, Robert Borsak of the Shooters and Fishers Party is not exactly an unbiased source, but this is interesting:


I refer, of course, to the so-called National Coalition for Gun Control—"national", hardly! The group is actually a coalition of two people and, as far as I can determine, was created to serve the ego of the self-styled next leader of the Federal Greens, our old friend Lee Rhiannon. As far as anyone knows, the coalition is made up of a Tasmanian lawyer based in Hobart and Samantha Lee, the grandly titled chair of the group.


If the coalition were properly constituted it would no doubt have a constitution, a registered address and, indeed, a membership list. We should be able to apply for membership. I do not believe the group has any of these community-based organisational attributes. It is a straw dummy, a coward's soap box filled with froth and no substance.

The Coalition of Law Abiding Sports Shooters said something similar a few years ago.

Well, the NCGC put out this Media Release in Feb 2008 complaining about a gun show in Wodonga. 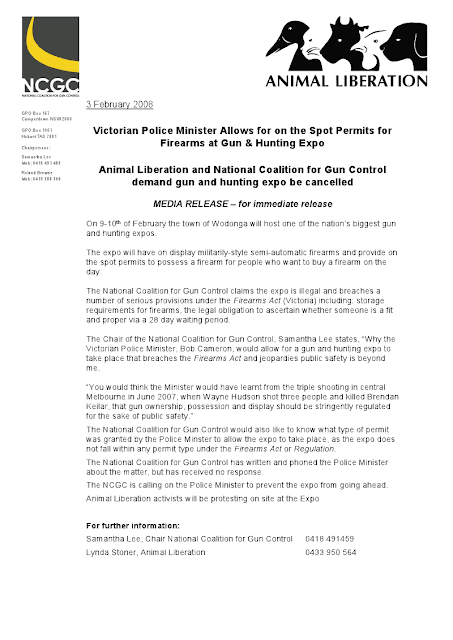 If you download the original Word document and have a look at the properties to see who wrote it, you get this:

Good thing the NCGC didn't stuff up and put out their release on the letter head of the NSW Attorney General's Department. (The "Angie Stephenson" is/ was also a spokesperson for Animal Liberation NSW). According to this link, Samantha Lee also worked for the Attorney General.

Anyway, here you have the NCGC allegedly being setup by Lee Rhianon (a Green), and it allegedly consisting of two people and a fax machine (or two people and the computers of the AG's department - I just hope the phone numbers on that NCGC press release don't belong to AG supplied phones). And then somehow the SMH manages to run a story that includes input from David Shoebridge (a Green) and a Green front group. Funny that. Is that a coincidence, or are we just being manipulated and played for fools?

Disclosure. I don't have any guns in the house. I haven't had a gun license in 2 decades. However, I do enjoy doing the odd bit of hunting every few years (when I get the opportunity) with friends who own firearms. I've been a member of a pistol club, and I started shooting at the age of 12 on a relative's farm. I've fired about a dozen different handguns over the years.

I was a pretty good shot before I joined the Army Reserve, and with some expert training, I became a bloody good shot. I am probably still quite proficient with the M-16, SLR, M-60, Browning Hi-Power and F-1 sub-machine gun. I reckon I could still operate a grenade launcher, rocket launcher and the Charlie Gutsache. I've never shot anyone, or taken part in a massacre of unarmed civilians. I manage to conceal my craziness most of the time.

As for the 3 guns per person limit that Shoebridge is pushing....I'll leave that for another day. If I had a bit of bush and I needed to clean out the vermin and feral animals, I'd want at a minimum:

That's four. I wonder how many foxes, rabbits, feral pigs, goats etc Mr Shoebridge has shot? I wonder if he's even seen a feral pig, and the damage that they do to our native bush? Somehow, I doubt it.

I don't think these anti-gun nuts understand the real need for guns out in rural areas. They certainly don't understand that normal people can have fun with guns, regardless of where they live.

They have managed to align gun ownership, or the desire to own guns, with being somewhat unbalanced, as if owning a gun was de facto admission of a personal moral failing.

A few years ago I attempted to get more information about the Pedestrian Council of Australia, Harold Scruby runs it. I emailed Mr Scruby re membership numbers in each state etc. He replied with a short email threatening legal action if I asked any more questions and refused to answer the ones I put to him. I did write to Dame Leonie Kramer who is listed as a patron however I did not receive a reply. The PCA has a lot of influence over road policies in Australia and claims to represent Australians surely they could be upfront about their membership figures. Then again Harold has his finger in quite a few pies.

Your list might be adequate for the average field/bush shooter but for a committed target shooter it falls way short.
I compete in a number of long-arm target disciplines including all four Clay Target disciplines: DTL Trap, Olympic Trap, Skeet and Sporting Clays - 4 purpose designed shotguns right there.
In rifled arms, I shoot smallbore benchrest, Olympic smallbore - in centrefire: F Class, heavy benchrest, light benchrest and Hunter Class benchrest. Another 6 specialised firearms, but absolutely essential if one is to be in the top half of the leaderboard. Add to this a few assorted field rifles in various calibres and you're well into double-digits.
That's just long-arms - if you are into pistol shooting as well and want to shoot just the Olympic disciplines, you're looking at four quite different handguns, minimum.
At the last police inspection of my storage facilities a very nice young constable asked me why I needed so many firearms, it wasn't within his remit - he was just curious. I asked him if he played golf, he nodded. And you only use one club, I asked? He gave a wry grin and told me he'd never though about it that way before - I hope the thought stuck with him.

Boy, I suspect you've only scratched the surface of the Australian political astroturfing industry.PR hacks and "researchers" etc in the office of state and federal ministers are generally political activists with axes to grind. It's just that in ALP state and federal administrations, the activists are often from the Green/socialist lunatic fringe and use the de facto state sponsorship for all it's worth. If the public found out the extent of it, they'd be shocked, I suspect.

Thanks for the info Boy.
Amazing what the MSM misses (or do they even look any more ?)

If I had a split personality, could I form a coalition with myself ? The possibilities are endless.

You blokes don't get it exactly....this has nothing to do with practical uses it is merely about the left's visceral fear and ideological hatred of firearms.

This proposed Bill, that will fail at the first hurdle, is simply more harassment.

Wow.
Nice work BOAB, that was a comprehensive dacking.
No less is expected of Rhiannon and co., but it unbelievable that Fairfax stoops so low, even while it proclaims itself as trustworthy and objective.
mr.simmon

"I wonder if he's even seen a feral pig...' Are you for real, he is a member of the Greens - he would see plenty of feral pigs at every meeting.

I've been pondering the hatred that the Watermelons have for firearms and gun-owners. Why? Why are they such haters? Then it occurred to me.... fear. Fear born of their victim mentality. You know how they're always outraged about something, and always the language of the victim. So in their, victim, minds, they feel they have no power over these machines they loathe and fear. So they try to manipulate the public and the law to allay their fear.
I would hate to be one of them. Always afraid and always a victim of their own, illogical, fears.

If you look into the history of communist take overs the first thing they want to do is disarm the population.

Exellent work, BOAB. I am amazed that the Coalition for Gun Control gets such massive exposure.
It is by the looks of it, just a couple of activists with like minded Media contacts.
At a guess, it is much the same as The Pedestrian Council, which I once saw referred to as "Harold and his Fax machine.

You should look into the facebook profile of the Director of the Drugs and Firearms Section, Criminal Justice Division, Federal Attorney General's Department. Guess which party he openly supports?

Grass plays an important role in enhancing the look of your house. I use in my house. It looks very beautiful. Thanks for informative post.
Artificial Grass