The heat is finally over - if anything, the drop in temperature was so great, it felt like I was freezing (even though it was a balmy 22 degrees). After a week of broken sleep and hard riding, I was so shattered, I slept for over an hour past my normal wake up time. That didn't matter - i didn't have to worry about getting up early to avoid frying this morning. I wish it would rain though - the lawns need a good drench. 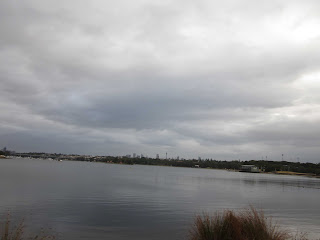 I was waiting at a red light on Friday when this bloke in a motorised wheelchair zipped past me. The lights went green just then and off he went. I fumbled locking my cleat in, so by the time we got through the intersection, he was in front. I then had no hope of passing, as his wheelchair didn't keep a particularly straight line at speed. Every time it hit a small bump (and this newly laid bike lane is a mass of lumpy tar), the wheelchair kicked one way or the other. I really didn't want to end up in the paper as "mad cyclist takes out disabled bloke", so I hung back and relaxed for a few seconds. If only Sydney's impatient drivers would learn to do the same from time to time. 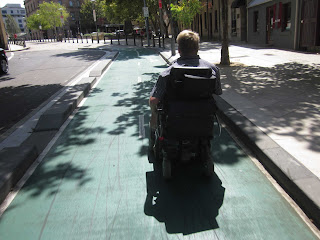 I don't know if it was the change in weather or my very late start, but the route in was covered in bikes this morning. When I hit Pyrmont, I had six in front of me at one set of lights and at least a dozen lined up behind. It was almost getting crowded. Every one of the bastards in this photo overtook me at one point or another - I don't think I was that slow; rather, I reckon none of them rode through the heatwave, so they were all fresh as daisies whilst I was totally wrung out and knackered. At least that's my excuse for being the hubbard today. If you don't know who the hubbard is, then it's you. 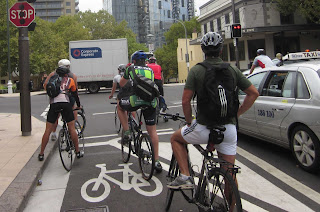 Your typical Cyclist Commuterasi (my Latin terminology) - complete with nifty little dual panniers and camelbak. I've never tried riding with a camelbak - it would have been bloody nifty last week in the heat. 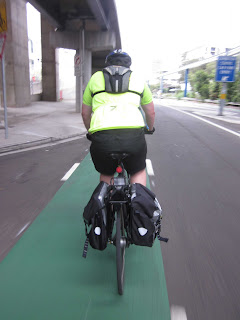 Those motorised wheelchairs are breeding. I saw an example of trolley rage in a newsagent the other day when one elderly gentleman in such a machine clouted another (also in a powered wheelchair) with a brolly because he wouldn't get out of the way.

Won't be long before they start putting blades on the wheels and going all Ben Hur on each other.

I seriously do not know why Roadies won't use Camel Backs...

When I go on group rides, I always have one. Fits my phone, wallet, keys and 2L of water.

More to to point, I can safely drink when I'm flying down a hill at 55kph, both hands safely on the bars.....

Simple - snobbery. My roadie friends give me heaps about my simple pannier. They wouldn't be seen dead with such an accoutrement. And the fact that I don't have carbon wheels.......