Newtown is one of the avant garde areas of Sydney. I used to spend a bit of time there in my pre-family days, getting plastered and seeing bands at the RSL, or catching a drag show at a gay pub. The area also has a plethora of excellent Thai restaurants, and it's home to one of the densest concentrations of 2nd hand book stores and record stores in Sydney. I guess it's at least 7 years since I was there "properly" - that is, having enough time to walk up and down the main street as well as stop for a bite to eat, a coffee and some book shopping. It's even longer since I was there on a Saturday night, chundering a kebab into the gutter before crawling into a taxi for the trip home.
An old mate was in town on Saturday, and had a few hours to spare before catching a plane home. I picked him up and we spent a good 3 hours just chilling in Newtown and remembering the good old days.
From what I saw, not much has changed. As we were walking back to the car, I suggested a game for us to play. We'd count how many of the following we saw over the next few minutes:
We got to two - him and me.
Newtown is quite overwhelmingly alternative. We really stood out as a couple of straight squares - we didn't even have a skateboard between the two of us, or a pair of $600 designer eye ware. Or a $200 Armani T-shirt stretched over a finely honed product of the gym.
It's an interesting place to visit, because it is so alien to those of us now living in the suburbs - even if I'm not that many suburbs away. I'm in the inner west, which is reasonably cosmopolitan, wealthy and tolerant - but Newtown is another planet.
Consider this - I saw one pram and 3 kids over a 3 hour period. Out here, kids are everywhere - the place is bursting at the seams thanks to a mini baby boom, and all the schools are overcrowded.
You rarely see someone around here with facial piercings or dreadlocks. You get the odd visible tattoo, but that's more on Saturday night when the slick young wog boys come out to party. We know a lesbian couple, but they aren't brazenly open about it. They certainly haven't gone in for the sorts of hair styles and modes of dress that generally shout "lesbian" to all and sundry. If there are any gays in the area, they're being very quiet about it.
We never get any beggars in any of the shopping areas, and whilst you see some shabbily dressed bogans from time to time, you certainly don't see any outright freaks.
Another thing that stood out is that almost every power pole had a Greens election sign nailed to it. I swear I saw more Green's signage in one street in Newtown than I have seen in the entire inner west.
I'm trying to get to some sort of point here. My point is that Newtown is a mecca for the sorts of people who work for the ABC or Fairfax - the leftoid press. If you lived in Newtown rather than say Strathfield or Macquarie Links (a reasonably affluent gated community way down south), your view of the world would have a certain tilt to it.
I guess this is why the SMH is constantly running stories on stuff like homelessness, gay issues, drug use, squatters and so on. These are all clearly big issues in Newtown - but not out where I live. And Newtown represents about 1% of Sydney if it's lucky.
I can see where the ABC/SMH are coming from - the place where I live is pretty boring. Yes, it's suburban dullsville. The neighbours are chiefly interested in things like which daycare centre to put their kids into and gossiping over the argument that broke out over a parking spot outside the church this morning. Their big concerns are things like mortgages, utility bills and having to get up at 5.30am to drive to work. It's pretty tame and pedestrian compared to getting off your face on acid at a gay venue in Newtown and spending the night playing bongo drums with some Byron Bay gypsies and a couple of trannies with bodies like Marky Mark.
And in case you are wondering why the ABC types cluster in Newtown, here's a map for you. Newtown is the blue circle at the bottom, the ABC the blue circle in the middle. Distance between those two points is 4km - an easy walk. 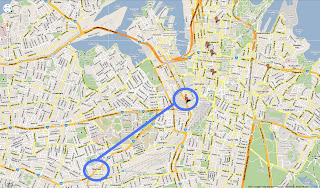 This is one reason why I think the ABC should move to somewhere west of Parramatta. It's never going to represent the views of middle Australia whilst it's staff are immersed in an environment like Newtown.
Badly proofread by Boy on a bike at Sunday, February 13, 2011

There's a Newtown in Toowoomba. I don't know if anyone from our local ABC lives there. I doubt it.

How on earth do you know where ABC or Fairfax people live? How many other suburbs are there within 4km of the ABC building? You're projecting your own prejudices on an area (oh no, openly gay people, think of the house prices!). Disappointing.

Have you ever been inside the ABC building BOB? I have, you may be surprised at how ordinary and urban looking most of the staff are.

Unfortunately the ABC have invested a lot in their studios and are unlikely to move anytime soon, but sounds like a fair summation to me BOAB.

Yes, I have been inside the ABC building - I've met quite a few of the back office staff there. I've been on most of the floors at Ultimo.

I have quite a few friends and associates who work in TV and newsprint (ABC, Fairfax, Murdoch and free to air) - most live in the inner city and all but one have no kids. And quite a few of them are gay. They're very interesting people - almost my favourite dinner party guests.

It's a mindset more than anything else. They might live in Enmore or Neutral Bay, but their heart and head is in Newtown.