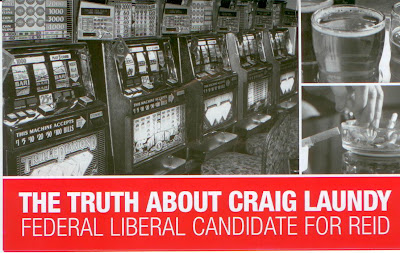 We had a pamphlet shoved into the letter box today - I've scanned the front of it. It must comprise the biggest series of free kicks given away to any candidate in yonks. Craig gets his name mentioned 6 times - priceless publicity paid for by the Labor party and distributed via the valuable time of the decreasing number of local Labor activists.

The inside is a whinge about how his family made their millions from gambling - and includes a statement which clearly mixes up turnover and profits.

But look at the above picture - what's not to like about it? Beer, smokes and pokies. Only the most sour faced nanny staters could find those images objectionable. If anything, they'd appeal greatly to traditional blue collar Labor voters. I don't smoke anymore, and I don't gamble - but I don't have a problem with those that choose to do so. And that beer looks awful tasty and refreshing. So much so, I had to go and put some beer in the freezer so I could have one with dinner. I now have a lovely positive association between nice cold beer and Craig Laundy.

And notice the use of the colour red and the naming of the Liberal party? That's amazing, given that Labor candidates have taken to using Liberal blue as their colour and avoiding any mention of Labor in their literature.

First rule of politics - never mention the name of your opponent. Just refer to "my opponent".

This has to get a mention in the next volume of "The history of stupid".
Badly proofread by Boy on a bike at Wednesday, June 05, 2013

Since it's campaign time I suppose it's a good time to share campaign stories. I remember a nice one from old Marrickville ALP member Fred Daly's political memoirs, 'From Curtin to Kerr', about an early campaign that involved a lot of puns - the Liberal candidate ran with

Be safe, be clean, be Liberal: change Daly

And Daly replied with

Give us this day our Daly bread

And of course went on to win the election, and it's easy to see why in retrospect: the Liberal gave his opponent's name prominence, and Daly's wholesome, even Biblical message (bread) easily trumped his Liberal opponent's namby-pamby call for hygiene.

At school I remember this line us kids circulated amongst ourselves: 'I don't drink, smoke, or swear. Oh fuck, I left me cigs at the pub.'

The stupid pricks have been mentioning Abbott from day one. He's the cause of all their and our evils. Free kick Abbott.