Today was a really bloody miserable day to be on a bike in some respects -  there's nothing like waking up before dawn and hearing the rain pounding on the roof and the wind beating against the walls, knowing that you will soon be out in that with nothing but a few bits of lycra and goretex between you and the elements.

It's always tempting to delay the start time until after the sun comes up, because somehow, riding in the rain in the dark is worse than just riding in the rain. It's a hump that I have to get over, and I don't always get over it every morning. I managed that today though. 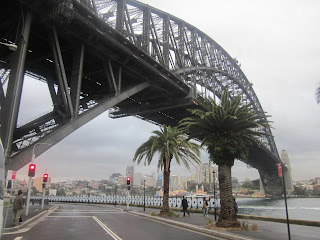 Why not take the bus?

Well, I arrived at work like a drowned rat, but was in a hot shower a minute later, and in dry clothes not long after that. As I sat at my desk, I watched a conga line of soaked colleagues wandering in, all dressed in damp suits and shirts crumpled by the rain. They looked miserable. I was happy. I hate - absolutely hate - getting wet in a suit. There's just something so wrong about it.

It wasn't an easy ride though. Coming over the ANZAC bridge was a bitch - the wind was howling from the right, and that meant the rain was blasting in at 45 degrees. That side of my face was totally hammered by the pelting rain - I thought it was hailing at one point, because it hurt so much. I was riding with one eye closed, as I couldn't open it on that side due to the velocity of the rain. The wind was nasty to ride into - I'm shattered from the effort. I had to keep my distance from parked cars as well, because the gusts from the side were knocking me around so much.

Still, at least my suit didn't get wet.
Badly proofread by Boy on a bike at Wednesday, July 20, 2011