More buggerising around with MySchool numbers

After reading that SMH story yesterday on school results and funding, I thought I'd delve into the numbers to cross-check what the author Bernie Shepherd had to say. I did it the hard way - I went to the MySchool website and extracted the numbers for all secondary schools in the postcodes of 2000 to 2100. I looked at 62 secondary schools in those areas, and then excluded those with no NAPLAN results and the special schools. 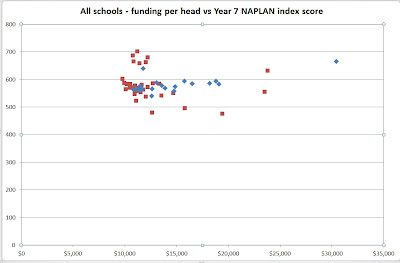 The first graph shows the NAPLAN index score for all the schools in this sample plotted against funding per student. Now I know that a lot of teachers and principals in the state school system have a really big problem with how those "funding per student" numbers were calculated - and so do I. But it's all we've got to go on. What this graph tells me is that most secondary schools (state and non-state) are clustered around a certain funding range, with a few expensive outliers - state and non-state. I wasn't aware that there are two state schools in NSW funded to the tune of nearly $25,000 per student - they're selective schools of a certain type. (If you click on any of these graphs, they will embiggen hugely and allow you to see all the data properly). 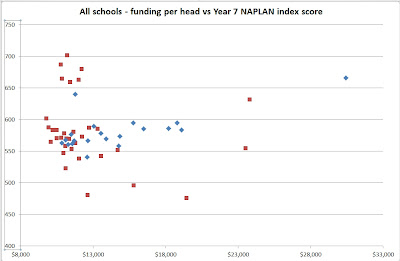 Here's the same graph with the left axis truncated to a minimum of 400 to give a better view of the data. Notice the little circle of 6 schools in the top left hand corner? They're all state selective schools. Their NAPLAN results are almost off the charts. 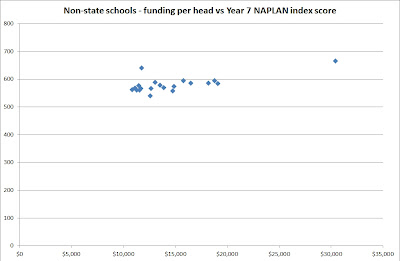 The graphs above and below show the state and non-state schools split out. With non-state schools, there appears to be some relationship between funding per head and NAPLAN results - the more funding, the better the results. The r-squared is 0.55. 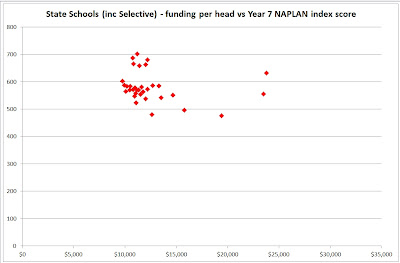 With non-state schools, there is no relationship between funding and NAPLAN scores. The R-squared is 0.012. Then again, the sample might be too small. 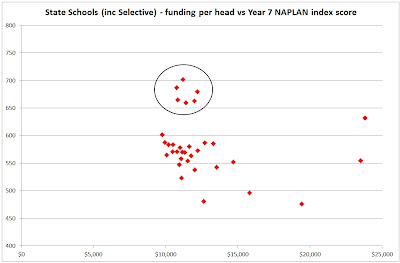 This graph shows the outlying selective schools. They really are a class above the rest. 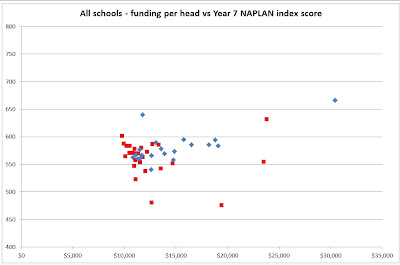 For this graph, I've removed the selective schools and shown all other schools - state and non-state. I should have removed the two at the bottom, as I have just discovered that those schools cater for kids with drug problems etc. Even then, there's not much relationship in the state system between funding per head and NAPLAN scores. 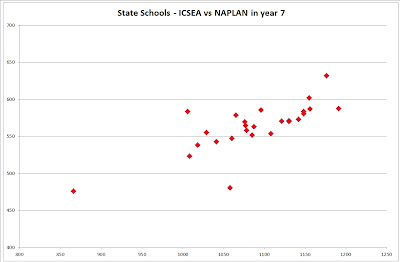 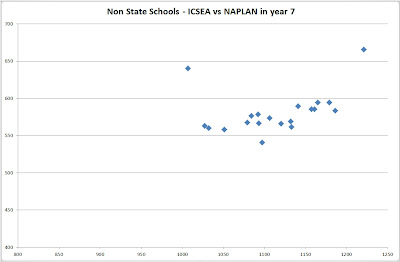 The relationship is slightly weaker with non-state schools, with the R-squared being 0.52. 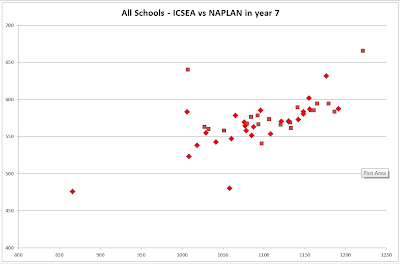 Here's the two groups of schools plotted together. 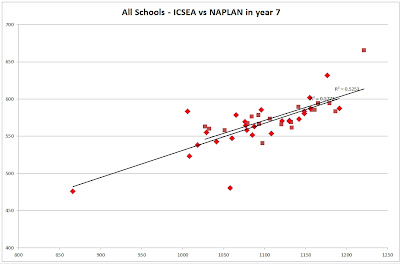 And here are both plots with both trend lines - you can see that the slope of both lines is almost exactly the same, and they almost overlap each other.

One might ask how Bernie got his hands on the data for 8200 schools from the MySchools website. Was he given the entire dataset by the government, or has he screen scraped a sample like I have?

One might also wonder how Bernie got an article published in the SMH - so I did a bit of Googling.

Bernie will be speaking at a conference later this month for the Australian College of Educators.

Maxine McKew - ex-ABC and Labor MP. Chris Bonner writes for the Drum occasionally, and is a contributing author for the leftie think tank, the Centre for Policy Development. "Chris is co-author with Jane Caro of The Stupid Country – How Australia is dismantling public education" - I guess that gives you an idea of where he is coming from.


Amanda Tattersall is a Ph.D. candidate at the University of Sydney, Australia. Her dissertation looks at community unionism—which occurs when trade unions campaign with community organisations and social movements on issues beyond wages and condition—and involves a comparative study of industrial relations and social movement practice in Australia, Canada and the United States.


Amanda Tattersall is also a special projects officer with the Labor Council of New South Wales.

Or if this is her either:


Amanda Tattersall is an elected official at Unions NSW (central Labor council in Sydney) with a background in union and community organising.


She was the president of the National Union of Students (NSW) in 1999 and co-founder of Labor for Refugees in 2001 (a partner in a wider movement for immigration and refugee rights).


She is the chair and co-founder of GetUp.org.au (a sister organisation to MoveOn.org, with 370,000 members) and now the founder and director of the Sydney Alliance, a broad-based coalition of 28 religious organisations, unions and community organisations.

James Whelan - also from the left-leaning Centre for Policy Development and a Director at the Change Agency.

James Whelan lives in Newcastle in the Worimi nation. His commitment to community action for social and environmental justice has drawn him to work in the community sector and in research and higher education. As a community educator and activist, James has worked with non government and grassroots community and environment groups.

Eric Sidoti is a Director of the Whitlam Institute. I doubt he leans to the left at all...


Director has been actively engaged in public policy development, strategic planning and communications throughout his career. For over a decade, prior to his appointment at the Whitlam Institute, Eric has managed Strategic options, his own small consultancy. This enabled him to develop long-term relationships with a small number of clients, principally the Dusseldorp Skills Forum and the Australian Red Cross in addition to the Enterprise and Careers Education Foundation, Greening Australia and Job Futures. He has been engaged in projects across a broad range of policy fields (education, training and employment; human rights; development; Indigenous land rights and education; humanitarian law and conflict; and welfare issues).
Eric was the Executive Director of the Human Rights Council of Australia (HRCA) 1992 - 1995, Communications Director of Amnesty International Australia 1987 – 1992 and National Secretary of the Catholic Commission for Justice and Peace 1985-1987.


"Mary Ann O'Loughlin and Jenny Donovan will lead a panel discussion -  Case Study on Smarter Schools National Partnerships - Cooperative federalism for equity in action? What are the learnings for schools, for governments?"


Mary Ann O'Loughlin - Ms Mary Ann O’Loughlin is Executive Councillor and Head of the Secretariat of the COAG Reform Council. She is also currently a member of the National Health and Hospital Reform Commission established by the Prime Minister and Minister for Health and Ageing.


Between 2000 and 2008, Ms O’Loughlin was a Director of the Allen Consulting Group, a leading economics and public policy consulting firm. Before joining Allen Consulting, she was Senior Adviser (Social Policy) to the then Prime Minister, the Hon Paul Keating MP


So she worked for Keating and was a Rudd appointment.


So now we know the company that Bernie keeps. Interesting.
Badly proofread by Boy on a bike at Tuesday, July 05, 2011

BOAB
I was a member of ACER for over twenty years when I was a principal. They're about as left as my right boot.
BTW your graphs show a connection between socioeconomic status and test results. We didn't need Myschool to tell us that back in the eighties when it was as true as it is now.

You will have lefty pinko Trotskyites coming out of you citrus degreaser bottle before ya know it.