How to compare apples with oranges

The Silly is at it again - this time fluffing the results of state schools.


THEY receive more than twice the funding of their public school counterparts but students from independent schools perform no better on literacy and numeracy tests, a new analysis reveals.

He looked at NAPLAN results, financing and students' social background for more than 8200 primary and secondary schools, scrutinising the relationship between funding and results.

I'm glad he got his hands on all the stats, because I sure as hell  haven't been able to get the whole lot in one go.

Here comes the apples and oranges:

Independent schools at the top end of the advantage scale were found to have an average annual income of more than $19,000 per student, compared with an income of about $8200 for each student at a government school.

Because I've had to extract my numbers laboriously by hand from the MySchool website, my sample is 1/100th the size of Bernie Shepherd's. My sample only has 7 independent schools, but their average fees amount to $12,400. The average of 24 Catholic schools is $9,079. The average of 52 state schools is $9,273.

Ha ha - he's done exactly what I did back in March. There are 5 NAPLAN scores - I simply added them together to give a total. His "averaged and scaled index" is simply my total divided by 5.

As I said before, I don't have access to the full range of data, but in my sample of primary schools only, the Micks had an index score of 448 and the state schools 420 - and these are schools from the same geographic areas. I didn't have enough independent schools to give a meaningful result.

The independent schools attracted about $3300 in state and federal government funding, with the bulk of their remaining income provided by fees paid by parents. Ninety per cent of the public schools' funding came from government.

90% of the public schools' funding came from government? Is he looking at the same data as me? A state school that raises more than 5% of its funds from fees, charges and parent contributions is doing pretty well.

The most advantaged Catholic schools received an average annual income of about $13,000 a student - more than $6000 of it from government - and recorded a NAPLAN index of 565.

Again, he's looking at the "most advantaged" and not the average. As I mentioned earlier, the average is down around $9,000 - and it's actually lower than what state schools get on average. It's amazing what results you can get when you cherry pick the data.

The schools in the sample had an Index of Community Socio-Educational Advantage (ICSEA) range of about 1200.

''In terms of the cost benefit, if we were looking strictly at educational outcomes as measured by NAPLAN, you would have to think government schools were better value for money,'' he said. 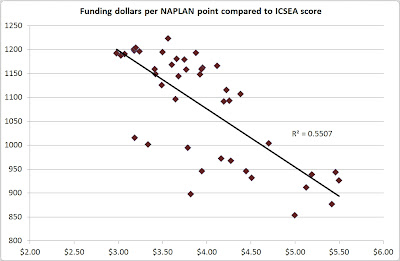 Well, on that note, I'll leave you with this graph showing how much it costs to achieve each point of a NAPLAN score. Schools on the left provide a cost effective education. Schools on the right provide an expensive (and often ineffective) education. 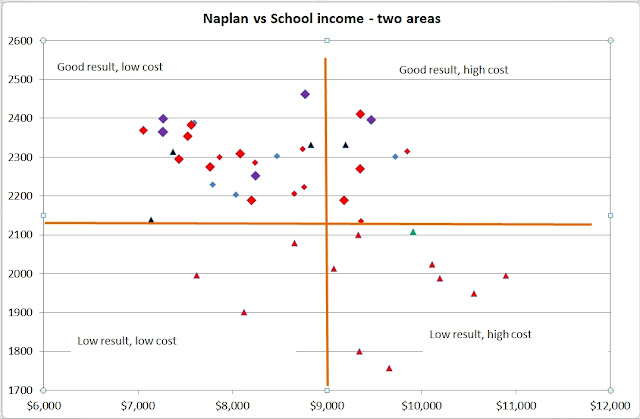 I'll use this matrix again - if Bernie Shepherd is right, then you'd expect to find expensive Independent and Catholic schools over in the right hand quadrants. But funnily enough, you don't. The worst performing schools from both a cost and results perspective (the bottom right hand quadrant) and all state schools.

Frankly, I'd love to get my hands on the full data set for MySchool to see if the results hold true when all the numbers are crunched. I think Bernie's analysis is interesting, but he's engaged in cherry picking and comparing like with not-like.
Badly proofread by Boy on a bike at Monday, July 04, 2011