Yeah, yeah I know - it's Friday and I'm putting up photos a day late. It's not like I get paid for doing this, so stick your complaints up your jacksey. I've been leaving for work before the farting of the sparrows, and most of the photos that I've taken have ended up like these ones - mainly blobs of grey with the occasional blob of colour. There's no point in using the flash on a scenic shot, and for it to work on other cyclists, I have to get up close enough to smell their unwashed knicks. No thanks. 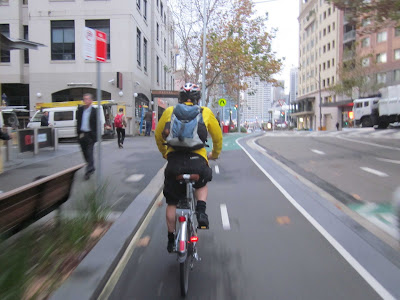 One small thing that I noticed this week about Clover's bike lanes is that most of them have been fitted with bike-saving drain grates like the one above. The only reason I noticed this is because I was in another bike lane during the week and narrowly avoided going head over handlebars when I swerved around a front tyre grabbing grate at the last second. It's the little things, like thinking about grates, that makes or breaks a bit of infrastructure. 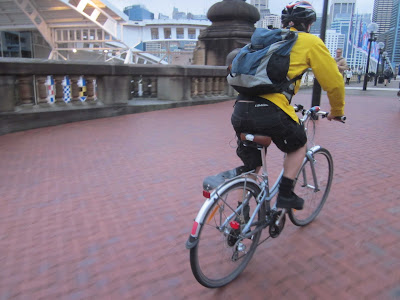 I was so taken with this bloke's bike that I couldn't stop taking photos of it. It's so different to mine - mud guards, fat saddle, lots of reflectors, panniers, step through frame and a kick stand. Each to their own.
Badly proofread by Boy on a bike at Friday, July 01, 2011

None of my photos are blurry. I must be better than you.