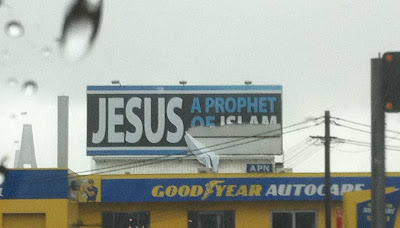 I have no idea when this billboard first went up on Victoria Rd in Balmain - if the media coverage is anything to go by, it was erected fairly recently.

I spotted the big rip in it on the weekend, but didn't manage to get a photo. That had to wait until this morning.

That isn't a result of the glue going all runny in the rain - someone has bothered to climb up there and do their best to rip it down.

If this isn't going down well in Balmain, which is about as trendy and politically correct and Godless as you can get, then that's saying something. Unless it was a militant agnostic who saw the name "Jesus" and blew a gasket.
Badly proofread by Boy on a bike at Monday, May 30, 2011

BOAB
Wrong on both counts - it's just someone swearing in print.
They forgot the exclamation mark after the first word....