Coincidence? Or is someone actually paying attention to moi?

Although I enjoyed the movie "The Castle" when it came out, I've generally found Michael Caton to be just a bit insufferable. The Castle came out in 1997 and made him a bit of a star in Australia. He used that star power in 1998 to campaign against public transport - namely a rail link to Bondi.


Bondi residents turned out in force at Bondi Beach on Sunday 26/4/98 to protest against the proposed CityRail extension from Bondi Junction to the beach.

The crowd, estimated at about 2000 people, was led by singer Kate Ceberano and actor Michael Caton.

Since the environmental impact statement for the proposed link started, hundreds of locals have been out to stop it, including a group called "Save Bondi Beach".

Write a letter of protest to the Premier:
The Honourable R J Carr MP

Some people, myself included, have long memories. From a Sydney Public Transport forum back in feb:


I was there that day... Michael Caton gave a great speech, said he was worried the beach would become packed to the rafters.

not long after that they started protesting about parking meters, lack of parking spaces and too much traffic


Maybe the NIMBYs were worried Bondi would become a bit like Cronulla.


Anyway, this was my independent contribution to history back on the 29th at Tim Blair's place: 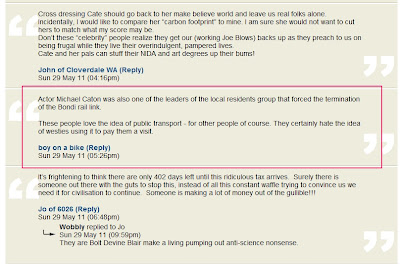 And what did I find when I opened the paper two days later? The Premier putting the boot in to Caton over the same issue. 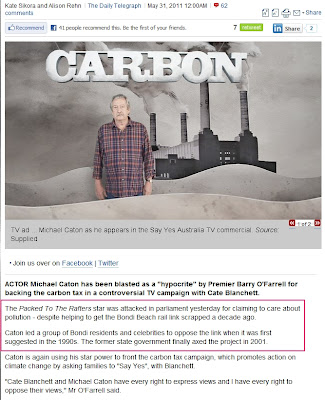 Should I be paranoid? Are they watching me right now?

On the other hand, they might have been after this bloke who got a letter published on 29 Sept 2009:

I couldn't help but roll my eyes when reading that Michael Caton is back on his soapbox again (''Tell 'em they're dreaming - north shore gets bolshie'', September 28). What noble victory is he aiming for this time? I am still suffering from his 1998 overthrow of the proposed Bondi Beach rail project.

The Save Bondi Beach group, put together by Caton and Kate Ceberano, cited reasons such as ''a new influx of people'', ''increase in crime'' and ''a substantial rise in beach rubbish'' to successfully lobby the government to back down from what would have been a low-impact solution to reducing visitor and resident traffic to Bondi.

Now, during peak hour, commuters can sit on a bus (if they can fit) or in a car for up to 30 minutes just trying to get up to Bondi Junction. On behalf of this fed-up group of residents, I beg Michael: can we please have a train to Bondi? I can hear his imperious reply: ''Tell 'em they're dreaming.''