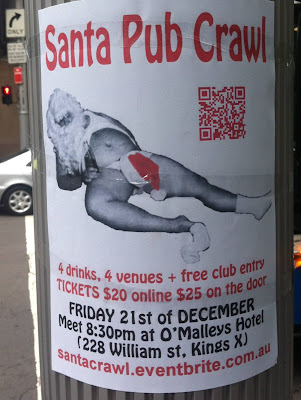 Pub crawl? How on earth can 4 drinks in 4 venues be classified as a "pub crawl"? The promoter of this event should be prosecuted for false and misleading advertising.

When I was at uni, there'd be several pub crawl contests each year. I wouldn't be surprised if they've been banned since then - binge drinking and all that. If memory serves me correctly, we'd form teams of four:

The job of the drinker was pretty obvious - they were the competitor. They had to be able to run between about 20 pubs, scull a beer in each and keep it all down until the end (vomiting brought instant disqualification).

The job of the navigator was to get the drinker from pub to pub. Obviously after 10 beers or so, the drinker would be heading off in all directions, so a reasonably sober navigator was required to finish the race in the correct pub.

The buyers would leap frog from pub to pub, ensuring that when the drinker and navigator arrived, there was a beer or two waiting on the counter for them - no time to waste buying drinks!

The last pub would invariably be one that served dark and ghastly brews - like the Sail and Anchor in Fremantle. After drinking middies at all the previous pubs, the finale would be the drinking of a pint of stout or dark ale - something guaranteed to turn the stomachs of unseasoned teenage bingers. After downing that, the drinker wouldn't be allowed to vomit for half an hour.

By that time, things would usually be pretty blurry for me, so I have no idea who won these races. You could chart the course between the latter pubs by the puddles or streams of vomit along the footpaths or gutters. Some drinkers would vomit as they ran, hoping that they wouldn't be spotted and disqualified - hence the long streams along the footpaths. After each race, the local papers would be full of indignant letters from local residents complaining about the intolerable behaviour of us young louts.

I have a photo in my collection of a mate with beer vomit pouring from his nose. He protested that because it came out of his nose, it wasn't really chundering, so he should be allowed to continue.

That was pub crawling! Not four measly pubs. The young these days - they really have no idea.
Badly proofread by Boy on a bike at Thursday, January 10, 2013

I understand your outrage. These people who try to take over traditional sports and then corrupt them to make money need to be brought to book. We used to have the "Kings Street Run" in Cambridge, UK. It was an individual sport, not a team sport. No navigators, coaches, managers, etc. Just you against the clock with a couple of time keeper/witnesses. If you made to the end, you were awarded a blue tie with a foaming tankard on it. If you peed or puked, you still got the tie, but it had gold and silver "P"s below the tankard. Such class :-)

How else will you know ya limit unless you experiment.

My limit is 3 beers BTW

Were they puissant pints or pissant schooners though BOAB, I suppose that's the real question....

Mists of time........got no idea what we were drinking. Possibly middies - although the course involved a lot of pubs. After the Americas Cup, Fremantle was awash with pubs. Almost one on every corner. You could get blotto in no time just by doing every pub in a one block radius from any random point.

Here in Houston Texas, we used to have an occasional bike pub crawl - about 20 miles and about 10 pubs on a Saturday afternoon. Nice workout for a good evening's drinking.

BTW, lots of the potmen/barmaids/riders were POMs. Thought you might want to know.

@ Anon: Rice University has the Club 13, whose members, on the 13th (and/or 31st) of the month disrobe, cover themselves with shaving cream, and run about the campus. Tradition requires that the runners making it to Valhalla (a cheap beer joint run by the Graduate Student Association) get free beer. So far, the pastime has not been monitized. Thank God.