Knob of the day 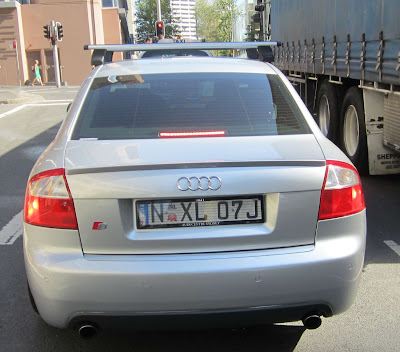 The idiot driver of this Audi gets my "knob of the day" award. I was going to present it to them personally (ie, bang on their window and ask them in which cereal packet they found their driver's license), but when I pulled up behind them, I noticed a dangly thing hanging from the rear view mirror.

We all know what dangly rear view mirror things mean.

They mean a clueless, incompetent moron is at the wheel. Someone so far down the evolutionary scale, it's no point even trying to engage with them on the short comings in their driving skill set.

So I just took a photo of their car and posted it here.

They weren't parked across a bike lane, or something silly like that. The driver went straight through a Stop sign and nearly bowled me over. A bit of emergency braking was required to stay off their bonnet. It's not like they stopped, looked through me and then took off. They just didn't stop at all. It was peak hour, so I guess they were in a rush and were desperate to take any gap in the traffic they could get. Just one problem - I was in that gap.

We really need some open carry laws in Sydney. I would have improved those four rings in the Audi symbol by putting a 9mm round through each of them. Or perhaps made a smiley face. I have done the smiley face at the range - with two nostrils instead of one.