Two weeks ago, Jessica Irvine, the SMH's economics writer published this about Italy and its debt:


Italy is the world's eighth largest economy, with government debt of $2.6 trillion, exceeding the debts of all the PIGS combined. The markets seem unimpressed by the Italian Prime Minister, Silvio Berlusconi, finally falling on his sword.


On Wednesday night, investors pushed the market interest rate for Italian sovereign debt to 7.48 per cent, crucially above the 7 per cent rate that eventually forced the PIGS to seek bailout funding.


The markets are now trapped in a self-fulfilling prophecy, one in which their action of pushing up the cost of Italian borrowing increases the likelihood that their worst fear will come to pass - the Italian government being unable to make payments on its debts.


As usual, that got me thinking - and not in a good way about the quality of the economics degree that Jessica gained.

When I first read it, I got the impression that all Italian government debt is floating rate debt. How else would an increase in interest rates cause the government to be unable to make payments on its debts?

Let's compare it to a household mortgage. You borrow a million bucks to buy a house, signing up when interest rates are 6%. You're paying $60k per year in interest.

However, as we know, when you take out a mortgage these days, you an choose a fixed rate mortgage, a floating rate mortgage, or a mix of the two. You might choose to borrow $500k at fixed rates and $500k at floating. That way, your interest bill would not climb to $90k - it would "only" rise to $75k.

Government debt is the same - it is a big melting pot of all sorts of debt instruments. You can find out all about Italian bonds here. There are BTPs, BOTs, CTZs, BTP Euro i and CCT.

If you go to the Italian Treasury website, you can see this graph on the historical structure of debt and average life. 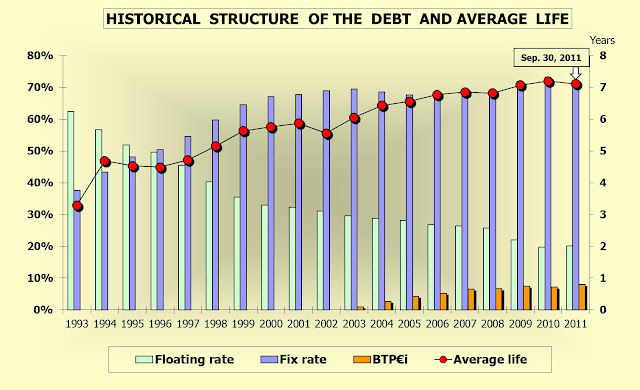 What does this graph tell me? Well, the percentage of floating rate debt has decreased from over 60% in 1993 to about 20% today, and the average life of the debt has gone up from about 4 years to 7 years. In other words, the wogs have a lot of medium term, fixed rate debt. The next graph comes from here. 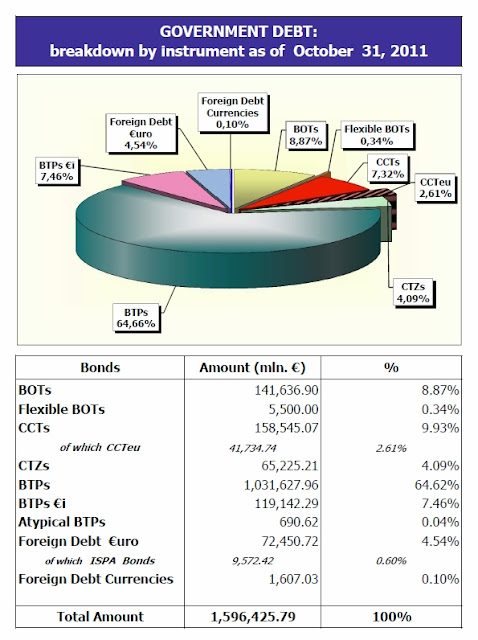 So, how is this going to cause the wogs to default?

They have three choices.

Let's say you owe $100,000. The debt is structured so that it is split into 10 tranches of $10,000 each, and each is repayable one year after the next. That is, you have to repay $10k this year, $10k next year, $10k the year after etc. However, as each tranche falls due, you can refinance it if you want to - and up until now, that's what you've been doing. When your $10k payment falls due, you pay it off and immediately borrow another $10k.

Then you find that you're about to be slugged with an interest rate hike - when you next refinance, you'll be paying 7%.

Not exactly the end of the world, is it?

Now, I said that you have three choices.

When it comes time to refinance, you can:

If the wogs choose option 1, they'll have no worries about defaulting. If they choose option 2, they'll be paying more and more each year as they roll over, but it's not like they'll face a dramatic increase all at once. If they decide to borrow more - well, they'll be in the shit. And deservedly so.

Therefore, when I re-read this statement:

The markets are now trapped in a self-fulfilling prophecy, one in which their action of pushing up the cost of Italian borrowing increases the likelihood that their worst fear will come to pass - the Italian government being unable to make payments on its debts.

I think, "No, you bonehead. What the markets are saying is that it is time for you to selection option 1, rather than option 3". The problem that they have is that they are completely incapable of getting their budget under control, and they expect other people to bail them out. Screw that.

I don't think Jessica gets the idea of what a market is. "The markets" might be fronted by a bunch of well paid, well fed wankers in sharp suits, but standing behind them are millions of small investors and pensioners. Brokers are simply managing the aggregated savings of tens of millions of people like you ane me. Are you happy to lend all your superannuation to Italy at 5%, knowing that you might lose 50% of it, or would you prefer to scale back the amount you lend them, and charge them a higher interest rate to guard against the risk of them not paying you back?

And when idiots like Jessica talk about "the banks taking a haircut", what she means is bank shareholders, which includes the superannuation of people like you and me, because our super funds all hold bank shares. So the pain of profligate Italian politicians is sheeted home to us - those that work and save and put something aside for the future.
Badly proofread by Boy on a bike at Friday, November 25, 2011

"which includes the superannuation of people like you and me,"
Tell me about it.
I had a pretty healthy super on "retirement". I've lost around $100000 through the GFC - nothing I had any control over, or contribution to. My investments are very conservative.
Bottom line is, the greed and corrupt practices of the Gordon Geckos of this world have stuffed me around no end.
I keep working to preserve what I have - fortunately I'm fit and enjoy the activity.
Sometimes I think the OWS people should be using slightly more direct methods - I'm thinking tar and feathers....

I find Itay's predicament very sad, but they have no-one else to blame - that is what happens when you keep electing numpties to office. A couple of observations though, first Italy has an unusually high proportion of domestically owned debt (buying government bonds is as widely used a savings mechanism as buying blue chip domestic shares here) so much of the pain is locally held. Second, whilst Berlusconi has taken all of the blame his major fault was despite being a very successful businessman (who ought to know better) he did nothing to reform the socialist excesses that have plagued the Italian economy for decades. Now they are all paying for it. There is no one thing. Just rigidity from excessive bureaucracy particularly in new project development and labor markets. In Italy no cause is too loopy to indulge, no local NIMBY group too irrelevant to ignore. But the labor markets are the biggest problem - rigid strictures and union involvement in management (they have supervisory boards with union representation) resulting in a fat, aged lazy and unfirable middle management layer and two generations of young and youngish (anyone under 40 now affected) who cannot get a permanent job (instead they have a series of jobs for just short of the 1 year that would see them become permanent and unfirable). Gillard should take note. The policies here are going the same way. All going swimmingly at present but that was due to two decades of productivity reforms and the emergence of China on our doorstep creating huge momentum. It may take a couple of decades to show but the avalanche of interference in the market is destroying productivity and can only lead to one thing - a destruction of wealth for average Australians (the wealthy will find a way to stay wealthy - don't worry about that!).