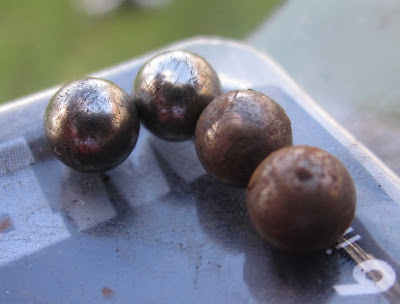 Riding in the rain isn't that good for bikes. Water gets into everything, along with the odd bit of mud and grit, and that doesn't make for rapid forward motion. I pulled the front wheel off today and gave it a spin - I could feel how gritty the bearings felt. When I pulled the axle apart, about a teaspoon of water ran out of where it shouldn't have. The two "shiny" bearings were on one side, the two muddy ones on the other. I cleaned the whole lot up enough to stop it from seizing up on my next outing, but clearly it's time to go shopping for some new stuff. 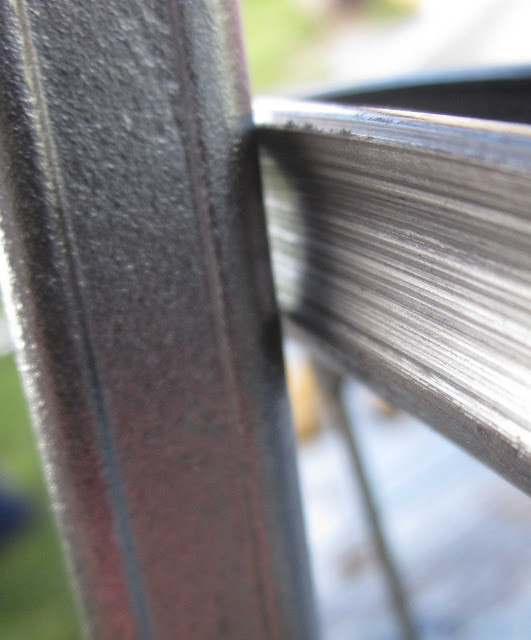 I also checked the rim wear by holding a spanner up flush with the rim. It should be flush with the spanner handle, not as concave as a waning moon. I've had rims wear to the point before where they gave up, cracked and then exploded. Thankfully, I was not on the bike at the time - having a rim explode and then getting stuck in your forks would be a recipe for going A over T. With a car, you just replace the disks on the disk brakes rather than the whole wheel - in the case of a bike, the brake disk also happens to be your wheel rim.

I could get the wheel rebuilt with a new rim and new innards in the hub, but I think I'll just replace the whole damned lot. I have replaced the wheels entirely twice before, and had two wheel rebuilds. Did someone once say that cycling was cheap?
Badly proofread by Boy on a bike at Saturday, November 26, 2011

Nice Information! I personally really appreciate your article. This is a great website. I will make sure that I stop back again!.carbon fiber bike parts