The wet that was 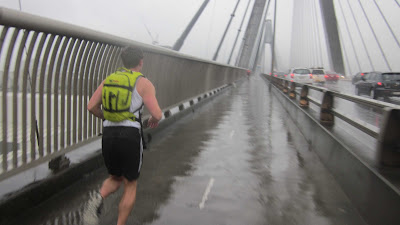 Bloody hell, it's been a sodden week. Not many photos this week as the camera has been living in a plastic bag to stop it seizing up (again). The good thing about wet weather is that the pedestrian traffic plummets by about 90%, so although the risk of crashing through sliding into something in the wet goes up, the risk of crashing into an idiot wandering along on the wrong side of the path whilst they adjust their iPod settings goes way down.

Cycling numbers also drop quite a bit in this sort of weather - it sorts out the girls from the hard nuts.

It's not like we're going to dissolve or drown in a bit of rain. It's just bloody water!

I did have one close call this week though - a bloody idiot taxi driver swerved from his lane into mine (without indicating) and then slammed on the brakes in order to pick up a fare. I had a choice of going into the back of him or around him. I'm glad I didn't try to go around him, as I would have been cleaned up by a bus in the lane next door. As it was, I pulled up about an inch off his bumper, fuming and shaking at how close a call it had been. What infuriated me the most is that I couldn't get around the side of his car to yell at him because there was a whole line of buses going past. Why he didn't wait for me to pass and then pull over is beyond me. Maybe he saw a taxi coming up behind me, and just had to jump across or lose the fare?