Geez, I must be getting past it. Until this week, I had no idea that you could buy condoms for light bulbs.

I'm talking about fiddly little bulbs that light up your car dashboard and things like that. The last bulb in my instrument panel gave up the ghost recently, so it was time to replace the little suckers.

I did a bit of reading on line and figured that the best thing to do was to replace the old bulbs with LEDs - they supposedly last for much longer. Although given the way I am falling apart, a new set of old fashioned bulbs might well outlast me.

I bought a set of LEDs online, and they arrived from the UK within a few days. Hoorah - I could rip the dash out and once again see how fast I was going at night.

Just one small problem - in "modern" cars, the bulbs sit in a socket, and the socket screws into the instrument panel. It's been a long time since I pulled a car to bits, so this was all new to me. In the old days, you just screwed the bulb in and that was it. However, it looks like bulbs have shrunk quite a bit during the intervening years, so you need the socket to avoid smashing the tiny little bulb when installing it.

And guess what? The LED lights need a different socket to the old style bulbs - aaaarrrrrggghhh! That's an LED socket below by the way - it has a big fat dish in it to accept an LED. 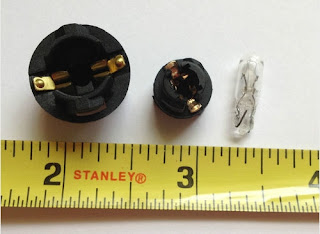 Since I couldn't afford to wait for a set of sockets to arrive from overseas, I popped down to my nearest auto store and bought some bulbs. I made sure I pulled a socket out (and the bulb) before turning up with it, as I've discovered that manuals no longer tell you what part number to ask for. That really annoys me. When I had lights blow on older cars, I could front up at the parts shop and ask for a WY8904C-8 and they'd go and find some for me - and I knew what to ask for as the manual had a table of parts in there for these sorts of things. The bloke in the parts shop said it's a way of forcing you to get all your stuff via a dealer. 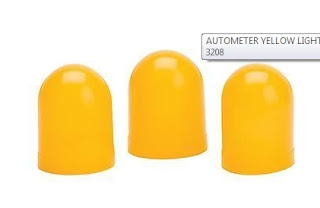 So I got my bulbs. But the old bulbs were green and the new ones were clear - what to make of that?

Thankfully, the old bloke in the shop didn't laugh out loud at my stupidity - he carefully lifted a bit of the green covering to show that it was a clear bulb covered in a green condom. Like the ones above.

Of course I should have bought some condoms as well, because when I pulled the blown lights out, I found that bits of the old condoms had welded to the lights over the years. I managed to refit two complete condoms and one partly torn one. I'm afraid some of the lighty bits are going to leak out and my speedo will get pregnant.

And how do you fit a bulb condom?

Funnily enough, exactly the same as a normal franger. Whilst I stuffed up getting them off, I managed to roll them on in a few seconds flat. And the bloody things are a damned sight smaller than the old fella. I've lost none of my touch.

All of this took a fair bit of stuffing around. The dash has been off and on four times this week. The first effort took me 90 minutes. The last effort took a bit over 15 - see, I can learn. I even remembered to test that the lights worked before screwing everything back together.

I now also have a packet of LEDs - unused. When these globes blow in 10 years time, I'll never be able to find them, and I'll have to go through all this crap again.
Badly proofread by Boy on a bike at Thursday, February 28, 2013