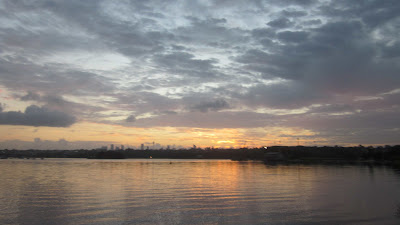 I like it when the morning looks like this. A bit of colour first thing is nice. 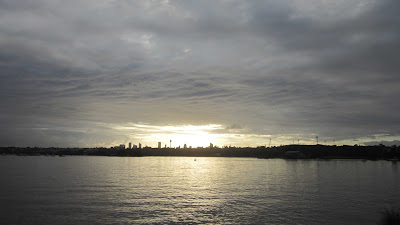 Unfortunately, most have been dull and grey like this. 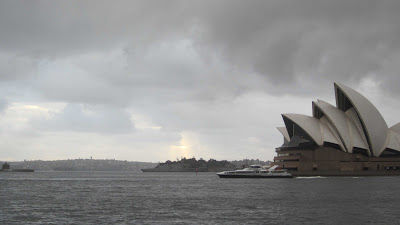 No picturesque, touristy shots of the Opera House. What I was trying to get is the shaft of light in the middle of the photo. It all but disappeared by the time I stopped the bike and grabbed the camera. I had a 5 second window to snap the photo, and I pretty much missed it. 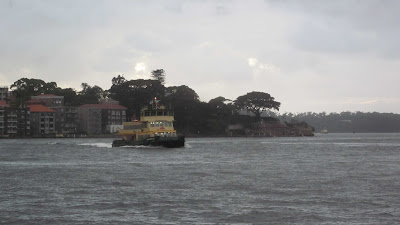 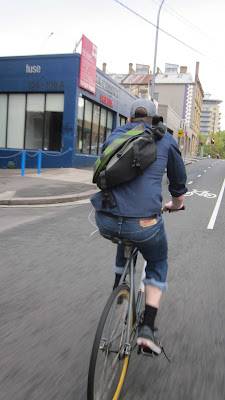 For a single speeder, this bloke was quick - he left me for dead. He wasn't into the safety kit much though - no helmet or gloves (useful for when you slide off and your hand hits the tarmac) and his rear light appeared to be covered in tape.

We rode towards the Pyrmont Bridge with another bloke who was quite aggressive - when we hit the bridge, the Rangers who monitor foot/bike traffic started waving and yelling at the other bloke because he was going too fast and cutting up the pedestrians. I've never seen that before.

There's a big difference in attitude at different times of the morning. I try to leave home a bit after 0600, and at that time, the roads and paths are pretty empty. Cyclists, runners and walkers are all generally calm and courteous. Even the tradies in their utes aren't too mental at that time of day.

However, I slept in one morning this week and left closer to 0700 - and was I in for a shock. I ran into more lunatic, aggressive cyclists during that one ride than I have seen so far this year. One bloke got right up my bum coming around the Bay, and he tried to overtake me on blind corners (nearly rubbing out people coming the other way) and he got narky when I slowed down for parents riding with young kids etc etc (one thing about kids - expect them to always to the unexpected, like suddenly dart in front of you without warning). When he eventually went past, he suddenly found he couldn't actually go any faster than me. He was fast when trailing in my slipstream, but useless when he got out front.

Moron.
Badly proofread by Boy on a bike at Thursday, February 09, 2012