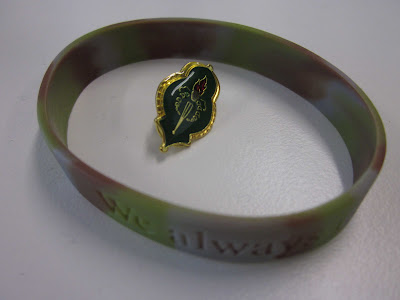 I trust you bums bought a legacy pin or wrist band this week?

I pulled over a Captain in a back street when I was riding to work and bought the pin off him. I think it was  his first sale of the day - I reckon he didn't count on a cyclist pulling a rapid U-turn, chasing him down and asking for a pin.

I decided a few minutes later that a wrist band would be easier to wear, so I stopped and bought one from a private a bit later on. As I was doing so, a lady stopped and said, "I'm not after anything - I just wanted to thank you for what you do", and walked off, leaving the poor digger looking rather stunned and embarrassed.

He offered up his wares to me and said, "You can have them in three colours". I hadn't looked closely up until that point, but they were clearly Army, Navy or Air Farce. It was immediately obvious to me which one I'd take. Three colours, my arse - I simply barked "Infantry!" and he handed over the appropriate bit of plastic.

As I rode up George St at around 0700, I was pleased to see little knots of people in suits clustered around ones and twos of soldiers, all buying pins and wrist bands. I wasn't the only one in the office with one displayed on his shirt, but I think I was the only one who managed to jab the pin into his neck whilst trying to put the damned thing on.
Badly proofread by Boy on a bike at Saturday, September 03, 2011

They're a great cause, and most of the good work is done behind the scenes and bullshit-free. They sell a great biro ($5).
Or see - http://www.legacy.com.au/DonateNow

I have a nice biro here in Port Macquarie as well. Legacy and Salvos always get my support.