My brain has been too fried by the heat this week to bother with posting photos. It's just been too damned hot to sit at the PC. Thankfully, we have a bit of a cool change coming through at present - the house might cool down enough to allow a decent night's sleep.
I was hoping we were in for a thunderstorm on Monday when I took this photo at about 0600 - a good drenching of rain would take the edge off the heat. No such luck. I simply sweated like I have not sweated in years. 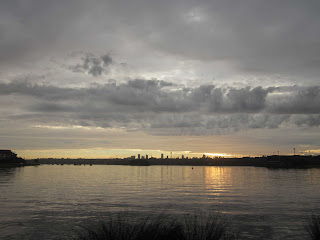 This bloke was feeling the heat, riding into town in his work clobber on a very trendy bike (white wheels and all). When I pulled up next to him at the lights, his face was dripping. I was the same - but at least I was heading for a 10 minute freezing shower and a change of clothes, allowing me to feel reasonably fresh and clean for a day in the office. 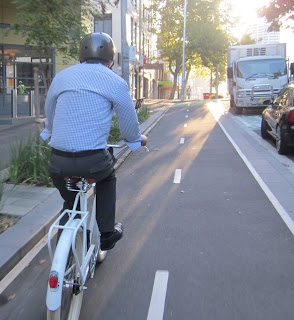 Normally the only time you see Dikes on Bikes is Mardi Gras time. 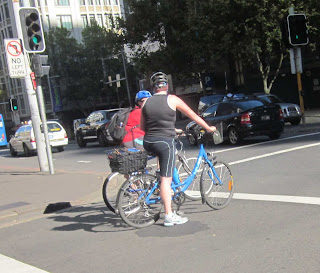 Why did I photograph this bloke? Probably because I was overtaking him. The madness overtook me soon after, and I just had to overtake everyone I met. There was a big pack of bikes moving through Pyrmont towards the ANZAC bridge - as soon as we hit the spiral leading up the bridge, I went for it. As others changed down, I changed up, and I fairly ripped past one and all. There was only one out of over a dozen that got away - only because I got stuck behind some dopey pedestrians. Why, oh why, do I do stupid stuff like that on a skin melting day? 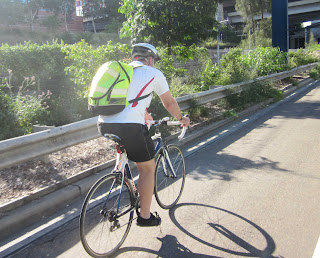 The state election is approaching, and we're seeing various political types from time to time standing on street corners, annoying the pedestrians. The bloke in the suit and hat was a Green. He didn't exactly fit the stereotype of hip young thing with numerous facial piercings. He looked about 75 - at least he was in a dark green suit. 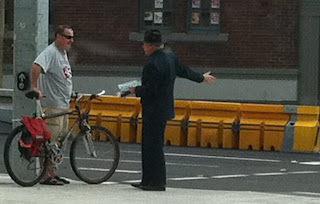