Whilst half of Queensland either blows away or is submerged under a dozen feet of water, we're sweltering away down here thanks to a very hot, dry spell. That's one big ball of fire coming up over the horizon, with not a cloud in the sky. To avoid the worst of it, I've been getting up a bit before dawn and riding off as soon as it's light enough to see. 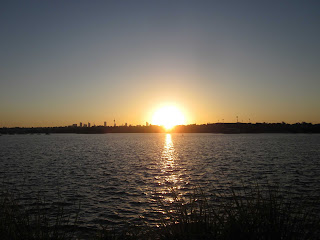 That has helped a bit, but not much. It was still 27 degrees when I left this morning. A lot of my workmates don't have air con at home (like us), and all complained endlessly today about a lousy night's sleep. 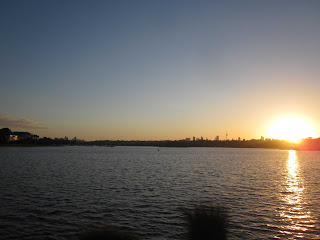 Even with the heat, there were a lot of people getting some form of exercise at dawn - runners, walkers, cyclists and maniacs doing push ups and so on. I think the smartest group were the rowers - at least they can pretend to catch a crab and fall out of the boat.

The other thing I've been doing to avoid the worst of the heat is to not race into work like an old maniac. I latched onto a hubbard each day, and dawdled into town at a much more leisurely pace than usual. Even so, I had to stand under a totally cold shower for 10 minutes to cool down to the point where I could put my work clothes on without drenching them instantly in sweat. 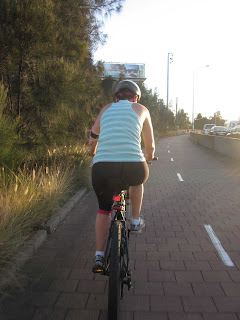 Here's co-ordination and common sense for you - just after council spent months (and millions) ripping up this bit of road, to build a bike path, along comes another mob with a ditch digger, and they tear up a nice trench across the newly laid bike path. 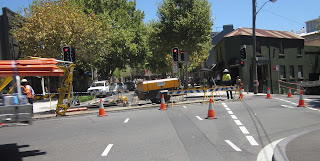 Riding home was a shocker. The bike thermometer read 27 when I left the car park - I thought I was in for a reasonably cool ride. Then it slowly climbed to 35 as I left the shadows of the CBD. As I crossed the ANZAC bridge, it hit 39, and then wobbled back and forth between 39 and 40. That's 104 for those of you that like Fahrenheit. It wasn't too bad, as the humidity was a lot lower than it has been for the last month, but as soon as I stopped, the sweat literally poured off me. Glad I packed two water bottles for the day.
And I have to say that the 300ml bottle of icy cold Coke that I consumed soon after getting home was the best drink I have had in a very long time.
Badly proofread by Boy on a bike at Wednesday, February 02, 2011

thank you very much