Bob Carr and a sad decrease in hazard reduction burns 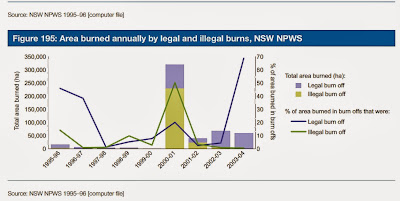 I found this graph in an Australian Institute of Criminality report on trends in deliberate vegetation fires in Australia. They have reports for each state - the one for Victoria is here.

Labor, under Bob Carr, came to power in 1995. Bob had a distinctly green tinge to him. I haven't been able to find the figures fore before 1995, but they were certainly pretty low in 1995/96 and they got much worse from that point on - declining to zero in 1999/2000. I guess Bob didn't want any smoke to interfere with the Sydney Olympics.

ouch, that graphic borks my ie