A good day for some 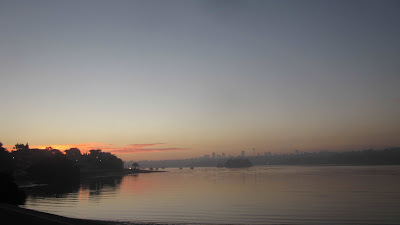 After days of mist and fog and rain, it was nice to see the sun for once. And fluffy pink clouds. 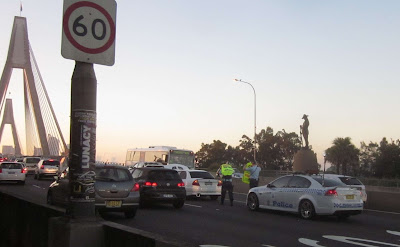 It was a lovely morning for a ride - not such a good morning to be driving (or crashing or breaking down) on the Anzac Bridge. The white care above was stuck in the middle lane with the bonnet up - the police turned up just as I got there. About 100 metres further up the bridge, there was a ute parked in the left hand lane with the hazards on - the driver was yaking on the phone and I couldn't work out if he too had broken down, or if the bloke above had smacked into the back of him and he was reporting the prang.

Not that I really cared much. I simply pitied the drivers that would be stuck in a rather large traffic snarl if those two cars weren't moved quickly.
Badly proofread by Boy on a bike at Friday, May 31, 2013