There were some bloody awful bush fires around Sydney today - lots of houses destroyed but thankfully no one killed (so far). We've had some very good rains over the last 2 years, and that has meant lots of grass. The grass has now dried out and - woof - it's gone up in smoke.

One result of getting knocked off my bike some years ago and landing on my head is that I have a very reduced sense of smell. I actually couldn't smell the smoke today - even though the sky was black with it. I wasn't bothered by it riding home - it didn't seem to clog up my lungs at all. Needed to give the eyes a good wash though - they were full of muck.The worst thing was the horrible head winds - apparently it was gusting up to 60km/h, and it certainly felt that way. I was getting blown backwards and side wards and when I got home, I was expecting the side fences to blow over.

This photo doesn't do this justice - the sun was a blood red orb glowing through the smoke. It was quite spectacularly spooky. Those bare topped poles by the way are were the monorail used to be. The demolition crew is still in the process of chopping it up into little bits and carting it away. 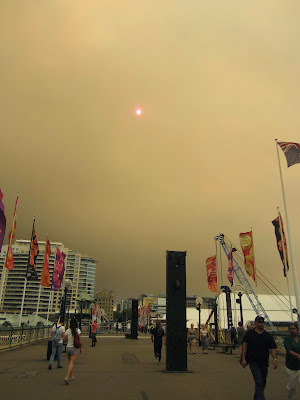 This photo didn't capture the scene either - that patch of sky in the middle was the most brilliant blue, with the black clouds above it. 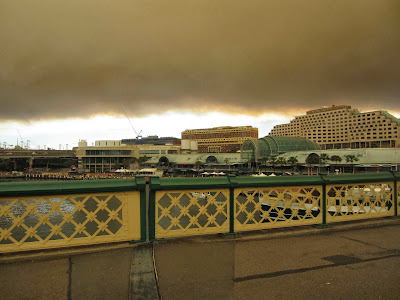 I've been intermittently following your blog for some time. For what it's worth, your wildfires have made the news in the U.S.

Last week's post about the temperature had me scrambling to convert C to F and then scratching my head as to why it was so warm. Ummm yeah...about three seconds later it occurred that as my weather is moving to fall (and currently 39F), you are quickly moving into summer. I guess I'll have to live vicariously and dream of warm weather cycling for the next several months...

Yes journalists love the fires. Be aware that most of what you see from them is a beatup: ratings gold of course. And I recommend that RFS Commissioner Fitzsimmons be made to contemplate the 'Boy who cried wolf' parable: His BOM advisers with their 'climate models' have no need for that message, but he does.