Have you been ripped off by Sydney City Council?

This story is a continuation in a way from my attendance at a bike path planning meeting this week that was organised by Sydney City Council. I was ripped off by a council parking meter, and the rest of this blog is pretty much the contents of an email that I have sent to Shayne Mallard, a worthy Liberal city councillor. I'm hoping he can straighten this out on behalf of all motorists who have reason to park in the city at some time or another. We know that Clover Moore and her fellow travellers hate the motor car, and this might just be a sneaky and underhand way of deliberately hurting the motorist even more.

When I attended the planning meeting, the parking meter that I bought a ticket from said that the cost of parking after 6pm was $1.10 per hour.

I put in $2 and received a ticket that gave me 54 minutes of parking – a rate of $2.20 per hour (which is the rate at all other times). The photo below clearly shows that after 6pm on a weeknight, the rate is $1.10 per hour. 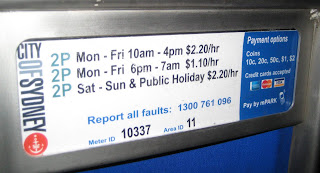 I’ve attached a photo of the parking meter, showing the rates and times, and a scan of my ticket, showing the time I parked, what I paid and how much time I got – everything except the hourly rate.

The ticket clearly shows that I parked on Wednesday night at 7.22pm - which is when the rate should be $1.10 per hour. It also shows that I paid $2, and received a ticket allowing 54 minutes of parking, rather than 108 minutes. 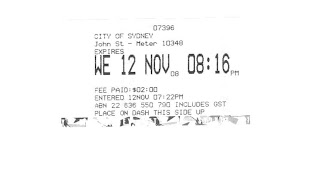 Either the rates have been altered, but the meters have not been updated, or someone has incorrectly set the software on the parking meters. Either way, I got less time that what I paid for.

Can you please take this up with the appropriate Council department. At this point, I will not ask for the dollar that I was overcharged to be returned.
Badly proofread by Boy on a bike at Friday, November 14, 2008

I love the veiled threat of, "At this point..."